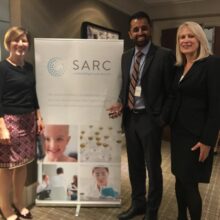 SARC (Sarcoma Alliance for Research Through Collaboration) is pleased to announce Dr. Anusha Kalbasi as the 2018 SARC Career Development Program Award recipient. At the 2018 SARC Semiannual Meeting, Dr. Elizabeth Lawlor announced the recipient of the award. Dr. Kalbasi is a radiation oncologist and translational scientist in the UCLA Department of Radiation Oncology and Division of Cellular and Molecular Oncology. He graduated from the David Geffen School of Medicine at UCLA, during which time he was a HHMI-NIH research scholar at the National Cancer Institute, where he worked on genetically engineering T cells for the treatment of solid tumors. During his residency in radiation oncology at the University of Pennsylvania, he studied the role of macrophages in resistance to radiation therapy in pancreatic cancer. At UCLA, Dr. Kalbasi specializes in the treatment of sarcoma and melanoma, and is a mentored faculty in the laboratory of Dr. Antoni Ribas in the Parker Institute for Cancer Immunotherapy. His research is focused on harnessing the potential of immunotherapy for soft tissue sarcoma, with a particular emphasis on uncovering the role of myeloid cells in the response to immunotherapy and radiation in undifferentiated plemorphic sarcoma.