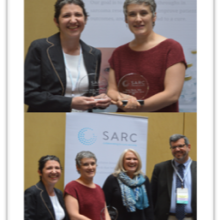 Dr. Lara Davis is a member of the Knight Cancer Institute at OHSU where she has dual appointments in the Division of Medical Oncology and Pediatric Hematology/Oncology. Her focus is extensively on sarcoma in these areas in both the clinic and in the laboratory. Dr. Davis’ project will specifically deal with CDK4 inhibition in a molecularly-selected population of sarcomas.

Dr. Angela Hirbe will begin her faculty position as instructor at the Department of Medicine, Division of Medical Oncology, Washington University School of Medicine, St. Louis, MO starting August 15, 2016. She is interested in utilizing genomics to identify drivers in Malignant Peripheral Nerve Sheath Tumor (MPNST) pathogenesis. Dr. Hirbe’s project will focus on  bIII -spectrin as a biomarker and therapeutic target for MPNST.